Overview
Adult-acquired flatfoot or collapsed arch occurs because the large tendon on the inside of the ankle - the posterior tibial tendon - becomes stretched out and no longer supports the foot?s arch. In many cases, the condition worsens and and the tendon thickens, becoming painful, especially during activities. Flatfoot or collapsed arch is also known as posterior tibial tendon dysfunction. This condition is different than having flat feet since birth (known as congenital flatfoot), although sometimes these patients develop similar symptoms and require similar treatments. 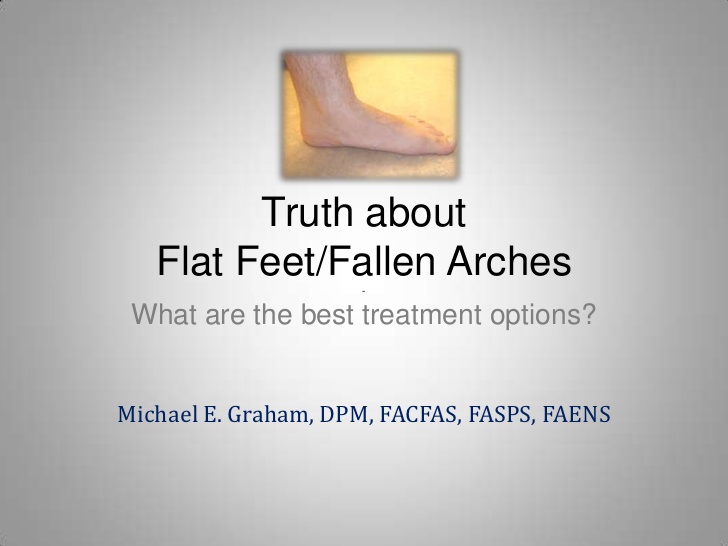 Causes
Obesity - Overtime if your body is carrying those extra pounds, you can potentially injure your feet. The extra weight puts pressure on the ligaments that support your feet. Also being over weight can lead to type two diabetes which also can attribute to AAFD. Diabetes - Diabetes can also play a role in Adult Acquired Flatfoot Deformity. Diabetes can cause damage to ligaments, which support your feet and other bones in your body. In addition to damaged ligaments, uncontrolled diabetes can lead to ulcers on your feet. When the arches fall in the feet, the front of the foot is wider, and outer aspects of the foot can start to rub in your shoe wear. Patients with uncontrolled diabetes may not notice or have symptoms of pain due to nerve damage. Diabetic patient don?t see they have a problem, and other complications occur in the feet such as ulcers and wounds. Hypertension - High blood pressure cause arteries narrow overtime, which could decrease blood flow to ligaments. The blood flow to the ligaments is what keeps the foot arches healthy, and supportive. Arthritis - Arthritis can form in an old injury overtime this can lead to flatfeet as well. Arthritis is painful as well which contributes to the increased pain of AAFD. Injury - Injuries are a common reason as well for AAFD. Stress from impact sports. Ligament damage from injury can cause the bones of the foot to fallout of ailment. Overtime the ligaments will tear and result in complete flattening of feet.

Symptoms
Initially, flatfoot deformity may not present with any symptoms. However, overtime as the tendon continues to function in an abnormal position, people with fallen arches will begin to have throbbing or sharp pain along the inside of the arch. Once the tendon and soft tissue around it elongates, there is no strengthening exercises or mechanism to shorten the tendon back to a normal position. Flatfoot can also occur in one or both feet. If the arch starts to slowly collapse in one foot and not the other, posterior tibial dysfunction (PTTD) is the most likely cause. People with flatfoot may only have pain with certain activities such as running or exercise in the early phase of PTTD. Pain may start from the arch and continue towards the inside part of the foot and ankle where the tendon courses from the leg. Redness, swelling and increased warmth may also occur. Later signs of PTTD include pain on the outside of the foot from the arch collapsing and impinging other joints. Arthritic symptoms such as painful, swollen joints in the foot and ankle may occur later as well due to the increased stress on the joints from working in an abnormal position for a long period of time.

Diagnosis
The diagnosis of posterior tibial tendon dysfunction and AAFD is usually made from a combination of symptoms, physical exam and x-ray imaging. The location of pain, shape of the foot, flexibility of the hindfoot joints and gait all may help your physician make the diagnosis and also assess how advanced the problem is.

Non surgical Treatment
Stage one deformities usually respond to conservative or non-surgical therapy such as anti-inflammatory medication, casting, functional orthotics or a foot ankle orthosis called a Richie Brace. If these modalities are unsuccessful surgery is warranted.

Surgical Treatment
Many operations are available for the treatment of dysfunction of the posterior tibial tendon after a thorough program of non-operative treatment has failed. The type of operation that is selected is determined by the age, weight, and level of activity of the patient as well as the extent of the deformity. The clinical stages outlined previously are a useful guide to operative care (Table I). In general, the clinician should perform the least invasive procedure that will decrease pain and improve function. One should consider the effects of each procedure, particularly those of arthrodesis, on the function of the rest of the foot and ankle.